Another name for the altar book or missal.

From the Latin word sacrare, meaning to “consecrate.” According to the prayer book, sacraments are “outward and visible signs of inward and spiritual grace.” Sacraments are physical actions that point us to deeper realities than we are able to experience with our five senses. The Anglican Church recognizes two major, or “gospel” sacraments, and five minor sacraments, or sacramental acts. The two major sacraments, Baptism and Communion, and called gospel sacraments because Jesus told us (in the gospels) to do them until he comes again. The five sacramental acts (or minor sacraments) are not all necessarily required of all Christians. They are Confirmation, Marriage, Ordination, Reconciliation, and Unction.

A room near the altar where the communion vessels, altar hangings, candlesticks, etc. are kept and cleaned. The room is often seen as the exclusive domain of the Altar Guild. 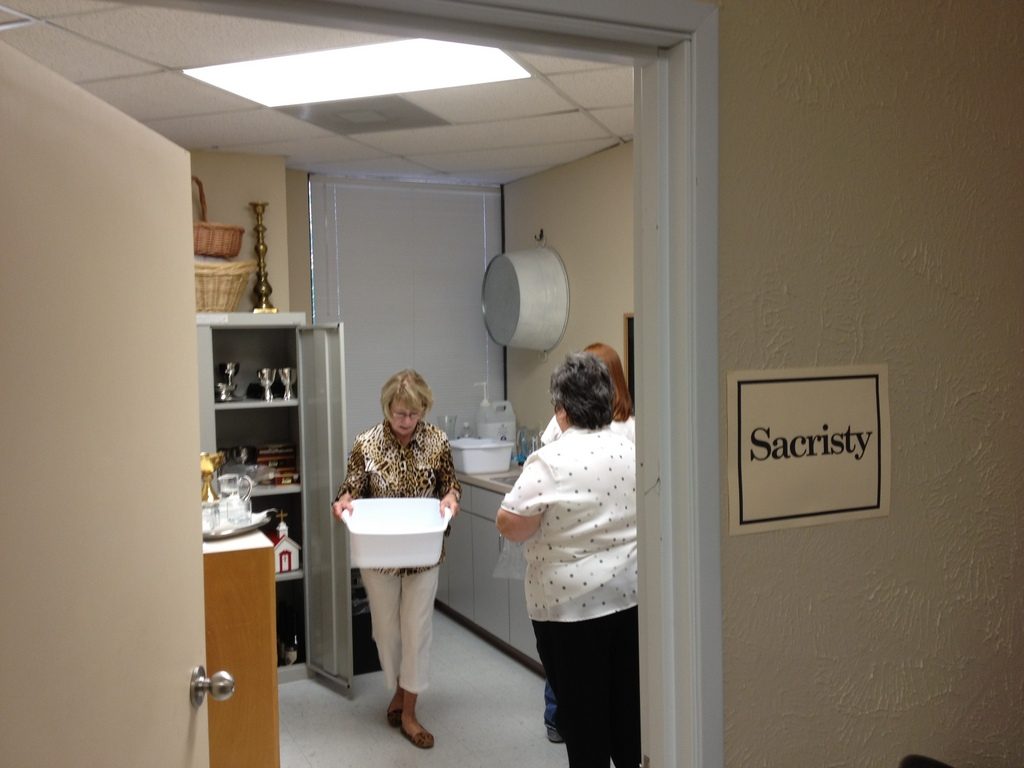 A lamp hanging somewhere in the sanctuary.  Sometimes there are three lamps, sometimes seven, but usually only one. A single, continuously burning sanctuary lamp indicates the presence of the Reserved Sacrament.

The part of the Holy Communion service that beings with the words, “Holy, Holy, Holy.”

The actual name for the bell is a “sacring bell,” but most refer it as a “sanctus bell” because it is rung at the time of the sanctus. In medieval times, when the service was said in Latin and the masses spoke English, the bell was rung at the Sanctus as a signal that it was time to pay attention.

A way of marking time in the Church. There are six seasons: Advent, Christmas, Epiphany, Lent, Easter, and the season after Pentecost. The church new year begins with the season of Advent, which marks the Advent (Latin: adventus) or coming of our Lord. Advent begins four Sundays before Christmas day. Christmas is a twelve-day season that begins Christmas day and continues to January 6th. Epiphany is both a day (Jan.6) and a season, and represents the manifestation (epiphany) of the gospel into the world. Lent begins 46 days before Easter with Ash Wednesday, and is a time of preparation for Holy Week and Easter. Easter is a six week (50 day) season which ends on Pentecost Sunday. The season after Pentecost runs from Pentecost to Advent.

The seats inside the sanctuary, used by clergy and acolytes.

A student enrolled in a seminary.

A general term for a residential academic program for the study of theology. Priests in the Anglican Church are usually (but not always) required to be seminary graduates. The academic program is generally three years, and culminates with the conferring of a masters degree called a Masters of Divinity, or M.Div.

A verbal address given after the readings, and hopefully given to further explain the readings and to put them in a modern context. In the Anglican Church the sermon is seen as a bridge between the Biblical world and the modern world. 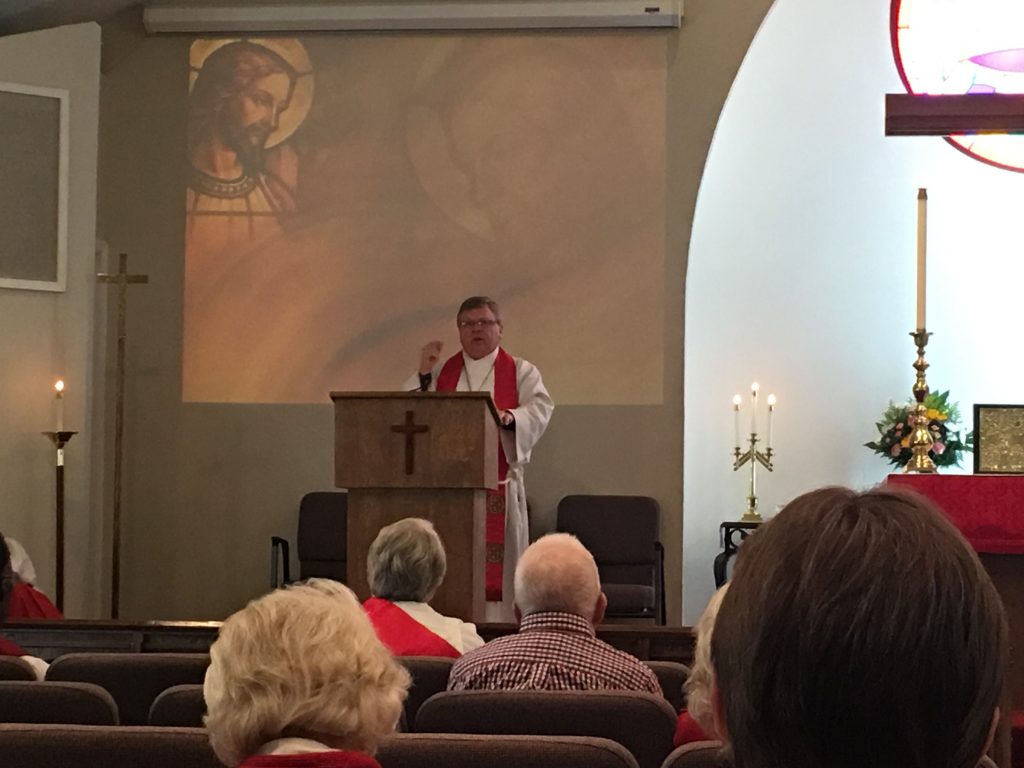 Someone who assists the celebrant at the altar, helping him or her set the table and perform ablutions.

An older English title for the person in charge of the church building [or a special portion of it] and grounds; in America the Sexton is also commonly head of maintenance and custodial services and may perform additional duties such as ringing the church bell.

A lighthearted way of describing a “high” church, referring to the parish or mission’s frequent use of incense (Smells) and Sanctus bells (Bells).

A long strip of cloth (often silk) worn around the neck of the priest and allowed to hang down the front of the clerical vestments. Only bishops, priests and deacons are allowed to wear stoles. The stole is usually worn at all Eucharistic services, weddings and funerals, but never worn at Morning Prayer services. The stole is said to represent the yoke of obedience to Christ. 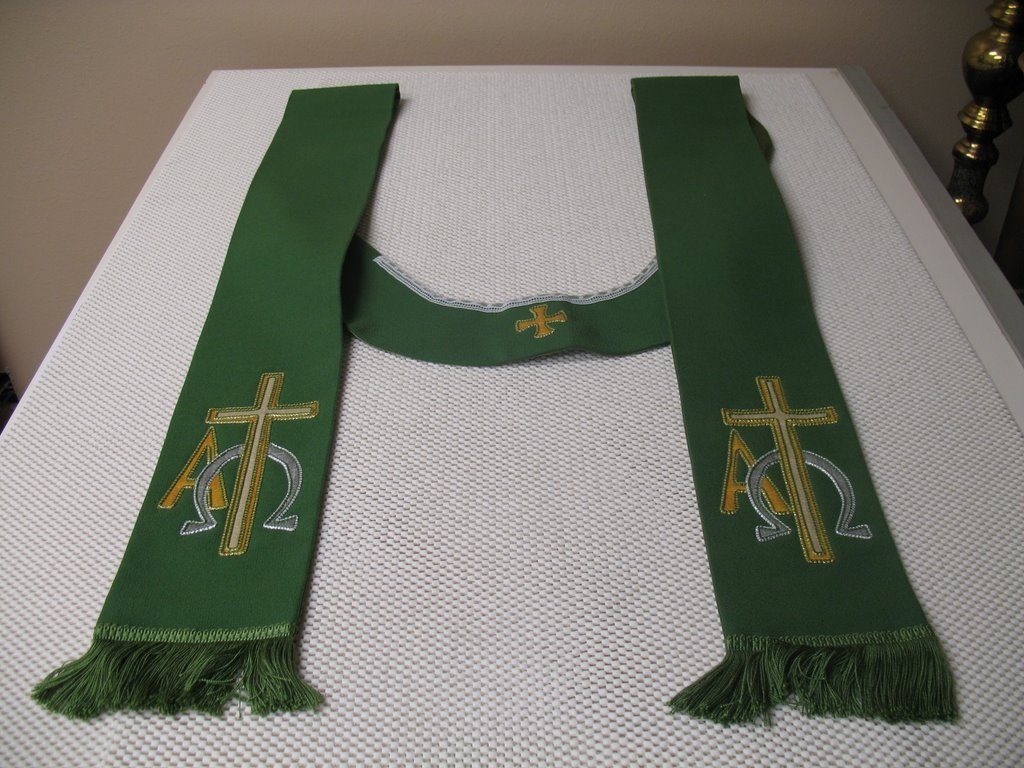 A white over-garment worn over other vestments (usually a cassock); somewhat longer and fuller than a cotta; The surplice and cassock are the traditional garments of the Anglican Church. 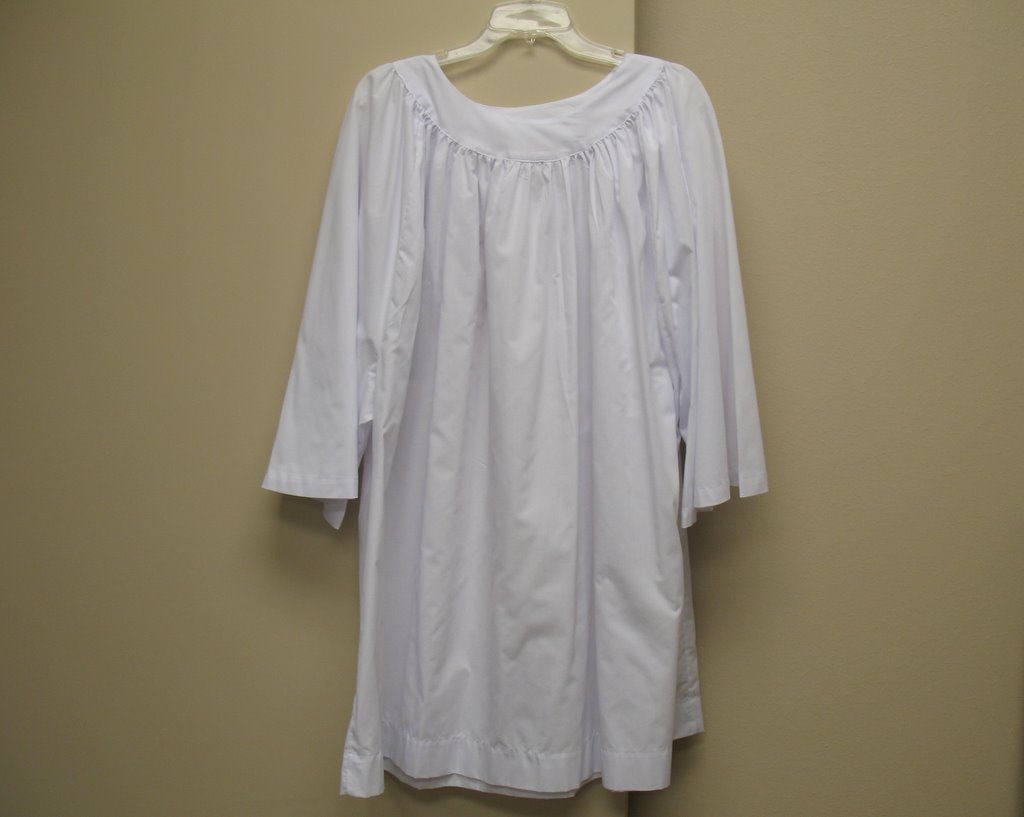 Latin for “Lift up your hearts.” The Sursum Corda is part of an antiphon that has been in the Eucharist since the third century.