(Liturgical color is red.) The Sunday before Easter, where Jesus’ final and triumphal entry into Jerusalem is observed. In many Anglican congregations the passion narrative read is also read. Real palm branches or crosses made from palms (or both) are usually distributed to the congregation. In some churches, Palm Sunday palms are saved and later burned to make the ashes for the next year’s Ash Wednesday service. 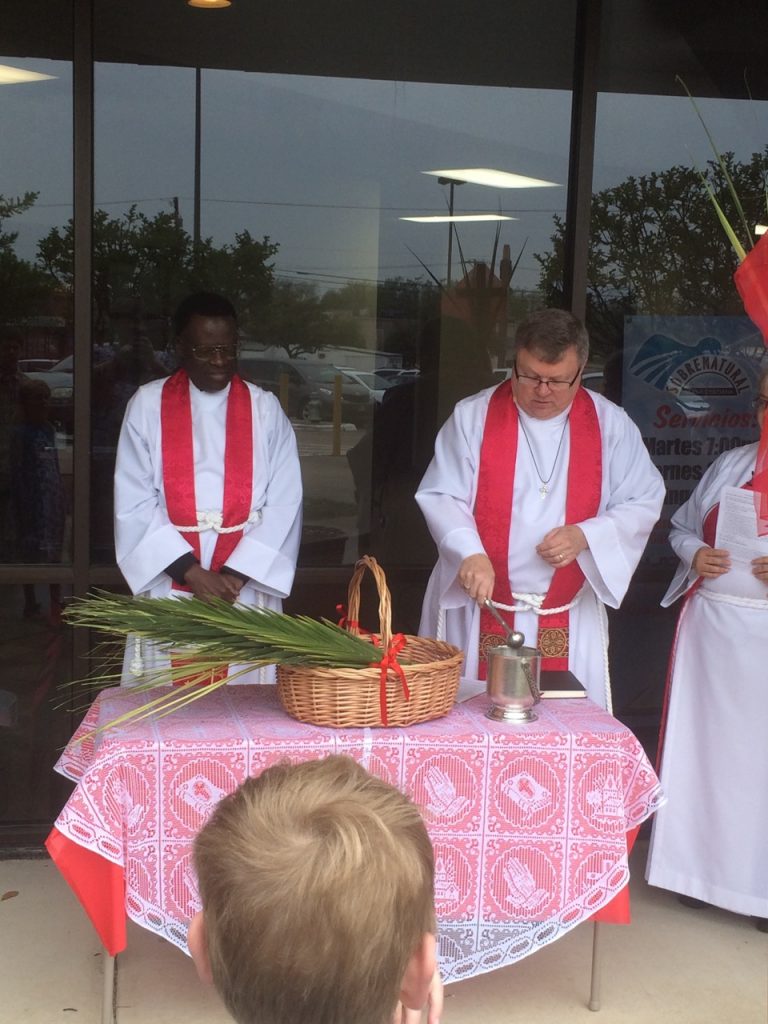 The group of people of a certain area who are organized into a local, self-supporting church. Sometimes the word is used to refer to the geographic region around a church. In the South, many of the present-day counties were once organized as parishes [as is still the case in Louisiana].

A gathering place for a local congregation separate from the church building. The term “parish hall” also is used to refer to a large room inside the Parish Hall/House. 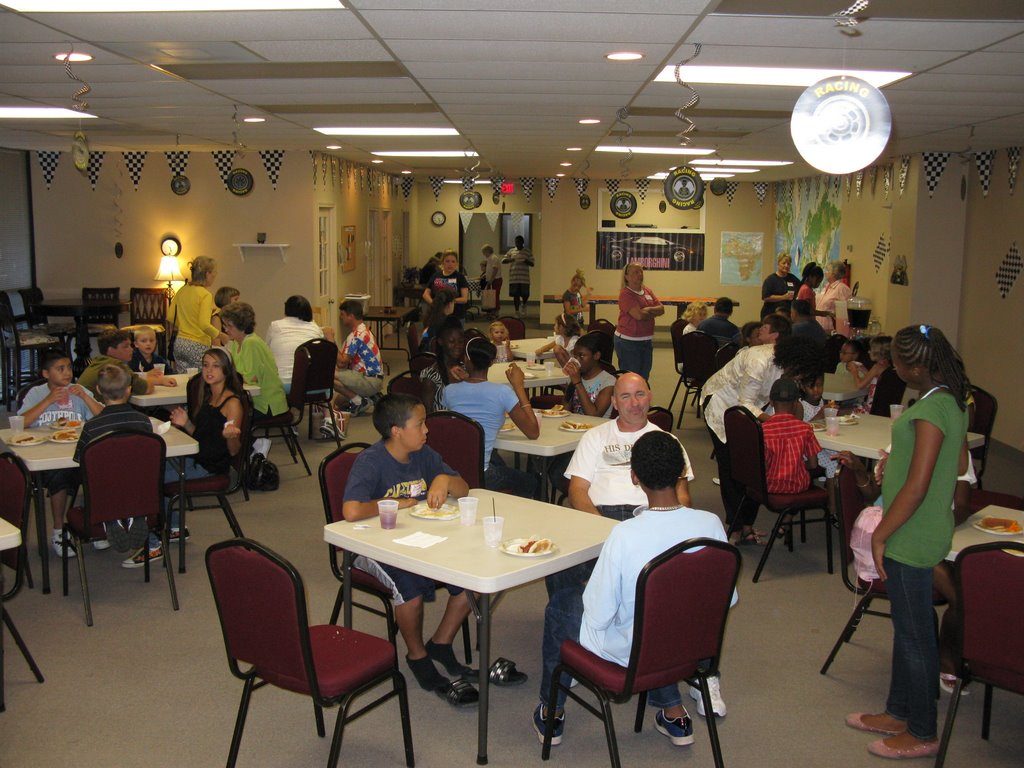 From the Latin word persona, meaning “person.” From the eleventh century English, where there term was a legal one, applying to the parish priest, because in all matters he was the designated “person” to deal with. Today, the term is not used as often as it was, and often evokes rural connotations.

From the Hebrew word Pesach, meaning Passover. A very large candle, sometimes with incense granule/wax pins inserted in a cross pattern into the side. It stands in a very tall holder and is placed in a prominent display in the epistle side of the sanctuary. The candle is lighted throughout the Easter season and traditionally beginning at Easter Vigil, and it is also used during baptisms, weddings, and funerals. 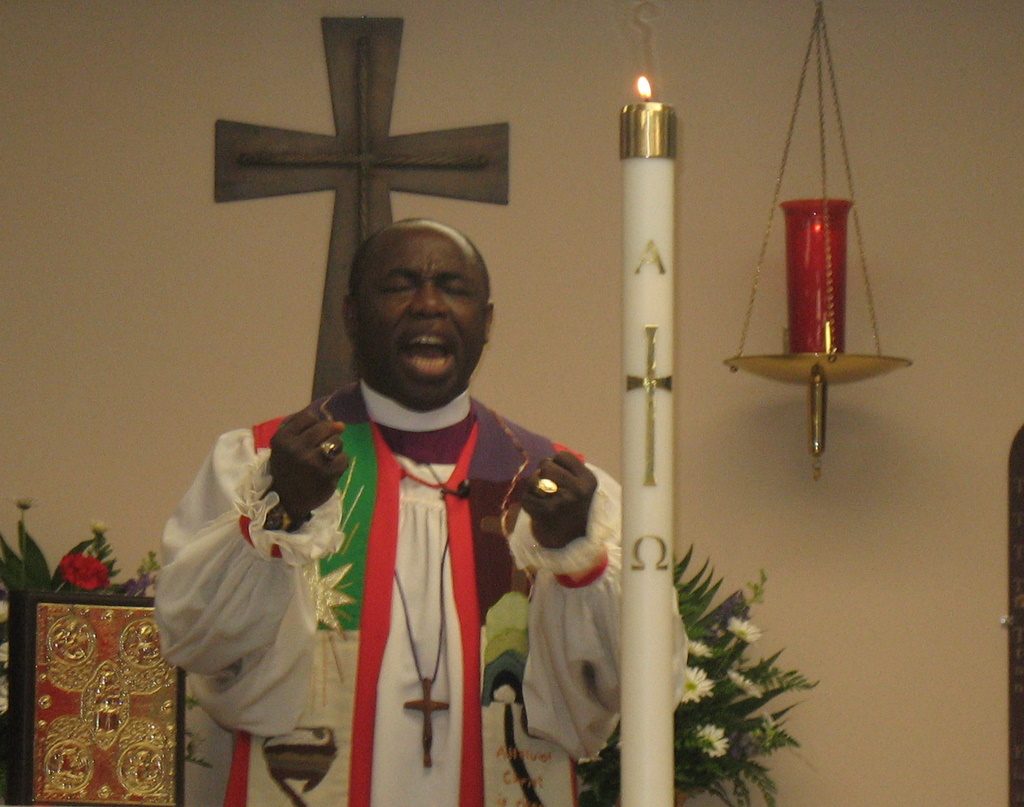 The name given to the gospel reading on the Sunday of the Passion – Palm Sunday. The reading chronicles the final hours of Jesus’ earthly ministry. The reading traditionally begins with Jesus in the Garden of Gethsemane, and continues through his arrest, trial, crucifixion, and death. It is the longest lesson read in the Church year (see: seasons), and the only gospel reading with an option allowing the congregation to sit during the first part of the reading. In many parishes the narrative becomes a passion play. Specific roles (Pilate, Peter, etc.) are assigned to different persons, and the congregation plays the part of the crowd assenting to the crucifixion. 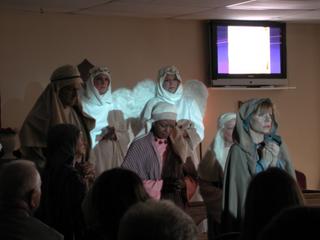 Another name for a clergy person. In both Latin and English the word simply means “shepherd.” All Lutheran clergy are called pastors, and many Anglican and Roman Catholic clergy are comfortable enough with the term to use it to describe them.

From Greek, patane: a shallow vessel. The paten is the vessel used to contain the consecrated bread during a Communion. 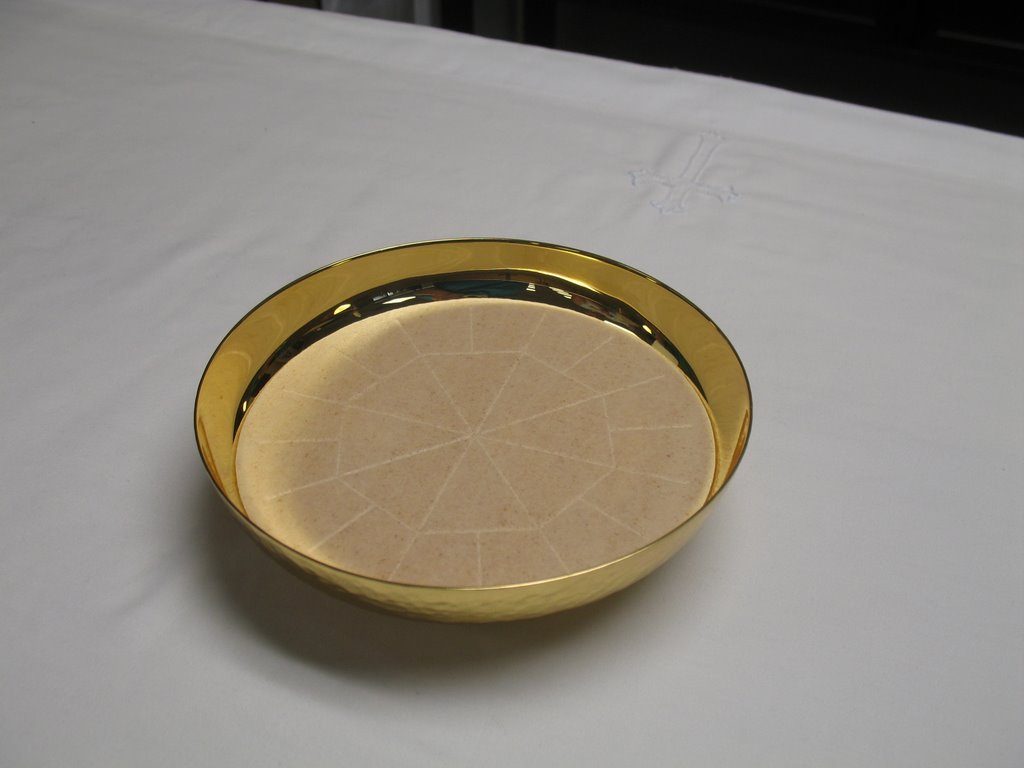 Also known as “passing the peace.” A part of the ritual in the Anglican Church in which members of the congregation, including the clergy, greet one another. The priest says, “The Peace of the Lord be always with you.” The congregation responds, “And also with you.” (And in more traditional uses “And with thy Spirit.”) Immediately after these words people shake hands or speak or sometimes embrace in the church. 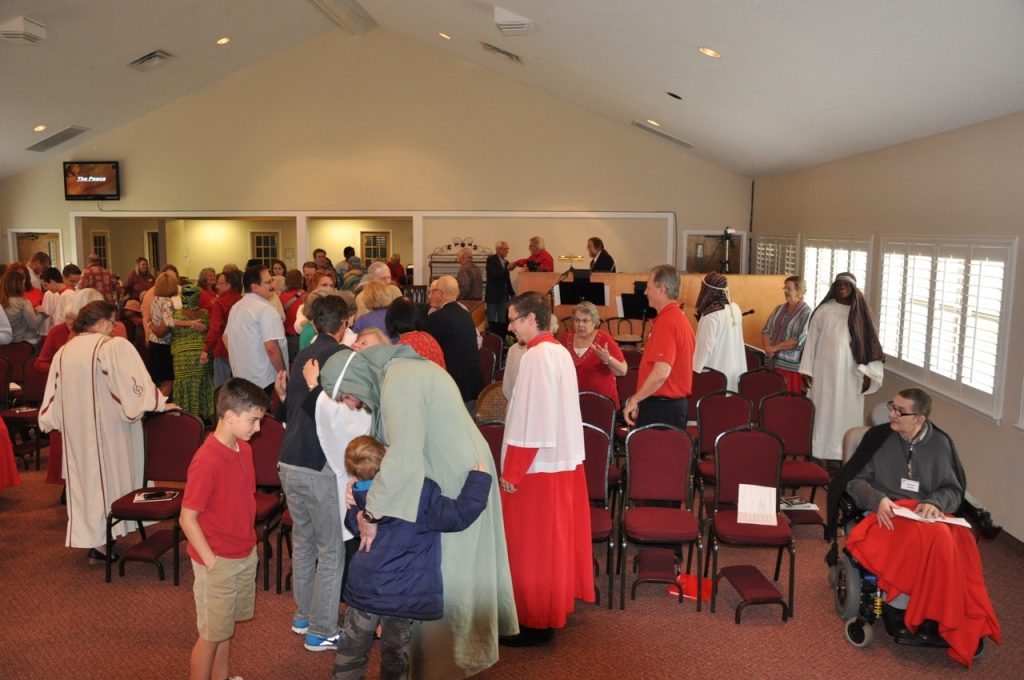 (Liturgical color is red.)The Festival Sunday that comes fifty days after Easter in which we commemorate the coming of the Holy Spirit on the twelve Disciples after Christ’s Resurrection (Acts 2). Pentecost is traditionally seen as the birthday of the church, and is also the beginning of the longest season in the church – the season after Pentecost. The season after Pentecost runs from the day of Pentecost to the first Sunday in Advent. Traditionally, in times past, the day of Pentecost was known as Whitsunday.

Long, single, and usually permanent seats in the nave of a church building. In the earliest times there were no chairs except for the clergy, and the congregation “congregated” in the nave. Later individual seating was added particularly for older members. Pews came into existence as a way for local churches to support themselves financially, by renting or selling pews to families. After the American Revolution and the disestablishment of the state-owned Anglican church, pew rental was the sole means of income for many colonial churches. In some parishes today, the family pew still exists. Today, however, the family does not actually own the pew. They only think that they do.

From Latin, meaning “fish pond.” The piscina is the stone or porcelain basin (traditionally set in the south wall of the Sanctuary) from which a drain pipe carries to the ground the water used in the ablutions. It is also the most convenient way for many Altar Guilds to dispose of the remaining consecrated wine after a service. The piscina is never, ever to be hooked up to the building’s plumbing.

(Christian) Prayer = Communication with, and submission to, the triune God through adoration, confession, thanksgiving, petition or supplication, out of an understanding of the Incarnation and supreme intercession of Jesus Christ, the Son of God, through whom all prayers are received, accepted, and answered  by God the Father.

A shorter and the most common way of referring to the Book of Common Prayer.

(Also sometimes called a footpace) The raised area or platform on which some Altars or Holy Tables stand. The word is Italian and literally means “a footstool.”

The actual, official name for an Anglican priest. The word is a Celtic contradiction of the Greek word presbyteros, meaning “elder.” The presbyter represents the bishop in a parish or mission, as he or she has since the earliest of Church times, when older members of a congregation were chosen to represent the bishop.

A special term for an ordained minister of a Roman Catholic or Anglican or Orthodox church; In Roman circles, the term refers to those who recite the Mass, but the Anglican Church traces the word’s origin to a Celtic corruption of the official term for Clergy – Presbyters. The duty of a priest, according to the prayer book, is to baptize, preach the Word of God, and to celebrate the Eucharist, and to pronounce Absolution and Blessing in God’s Name.

Another title for the vicar of a mission.

The part of the Communion service that proceeds the Proper Preface or the Sursum Corda.

The line of choir, clergy, acolytes, crucifer, torchbearers and others walking into a church building to begin a service. 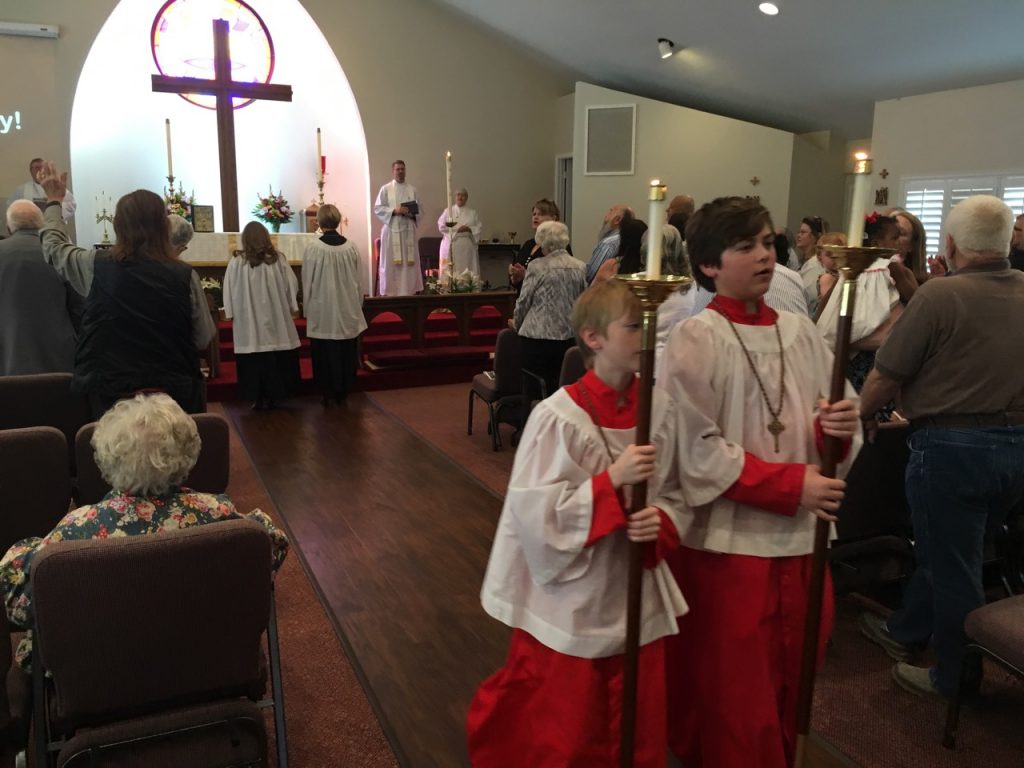 The large cross carried by the crucifer during the procession. 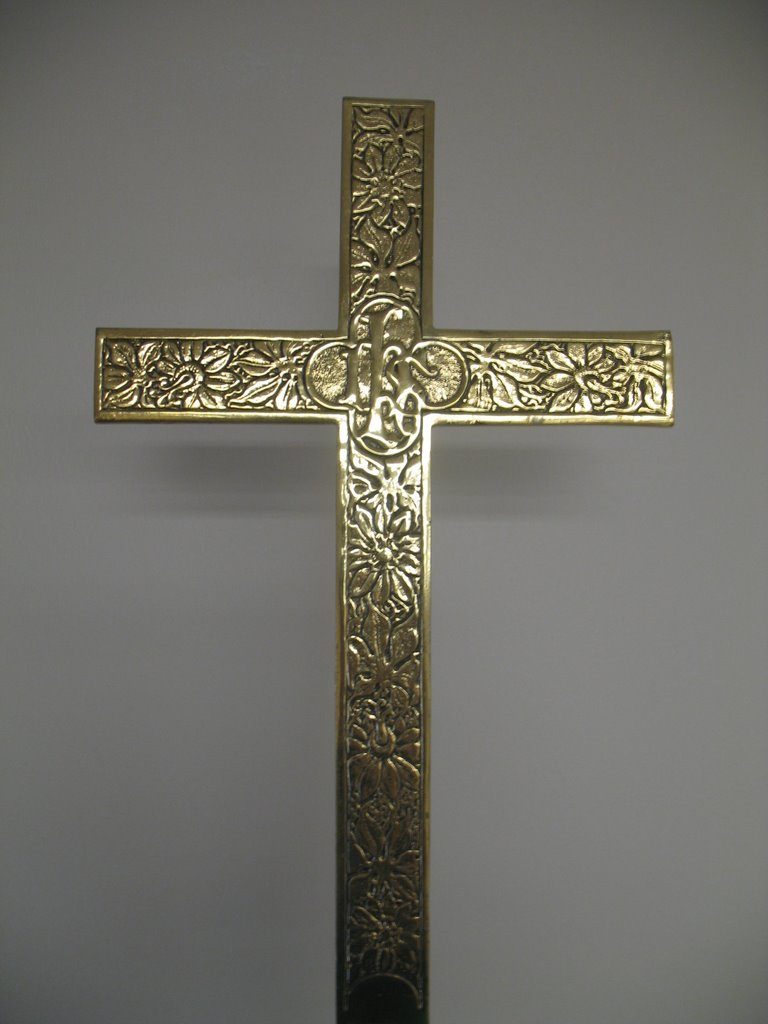 (Often referred to as “the propers”) “The Proper of the Church Year includes the appointed Collects; the Proper Prefaces… and the appointed Psalms and Lessons.â€

An addition to the words of the Communion part of the Eucharist which follows the Sursum Corda. There are Proper Prefaces provided for all the the Church’s seasons, as well as for major feasts of the Church.

From the Latin pro, meaning “for,” and testare, meaning “witness.” Thus literally, if one was to be a protestant it would mean he or she would be a witness for something. The word was first used in 1529 as part of Martin Luther’s reform movement. Many Anglican Churches do not officially consider themselves to be a Protestant church, but are considered to be Protestant by Roman Catholics, as well as by many lay members of the Anglican Church.

A complete list of all 38 provinces in the Anglican Communion can be viewed here.

From the Latin, pulpitum, meaning “a platform.” A raised platform or podium used for the sermon or homily; generally located in the front of the gospel side of the nave. In some Colonial church buildings and in many non-Anglican churches, the pulpit is in the center, to signify the importance of the sermon.

From Latin purus (pure) and facare (to make). A purificator is a small piece of white linen used at Communion to cleanse the chalice, by wiping the rim of the chalice with the purificator. 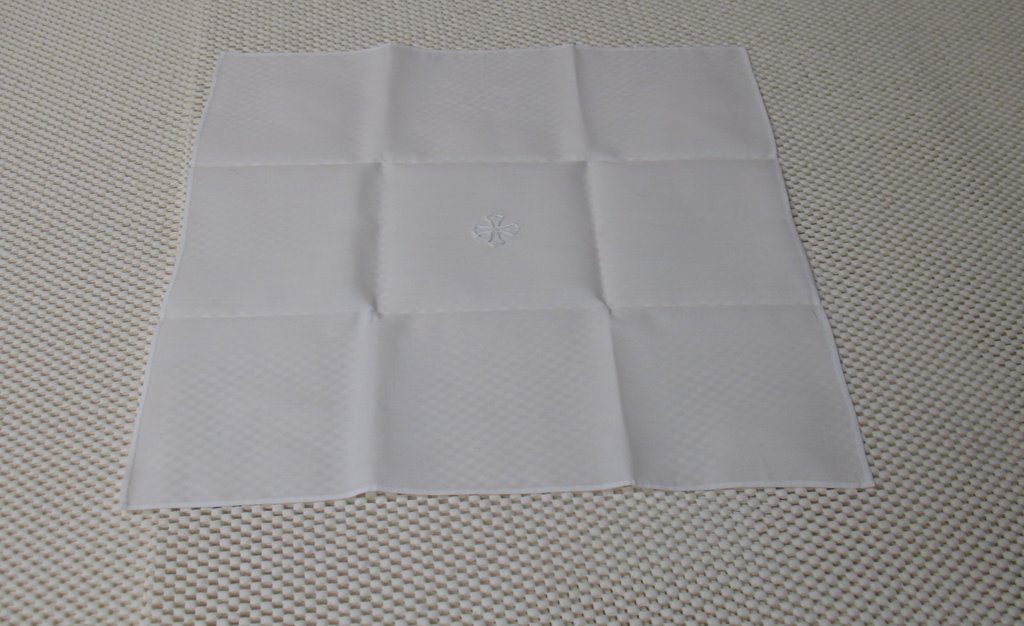 The primary color used in the season of Lent, and the most popular color used in Advent. Purple signifies penitence and preparation. Purple was originally a sign of royalty, as purple dye was rare. Thus, a purple clergy shirt (or some shade of violet) usually indicates that the wearer is a bishop.

A small container used for transporting the Host.  Most commonly used by a priest or LEM when taking Communion to a sick person or shut-in. 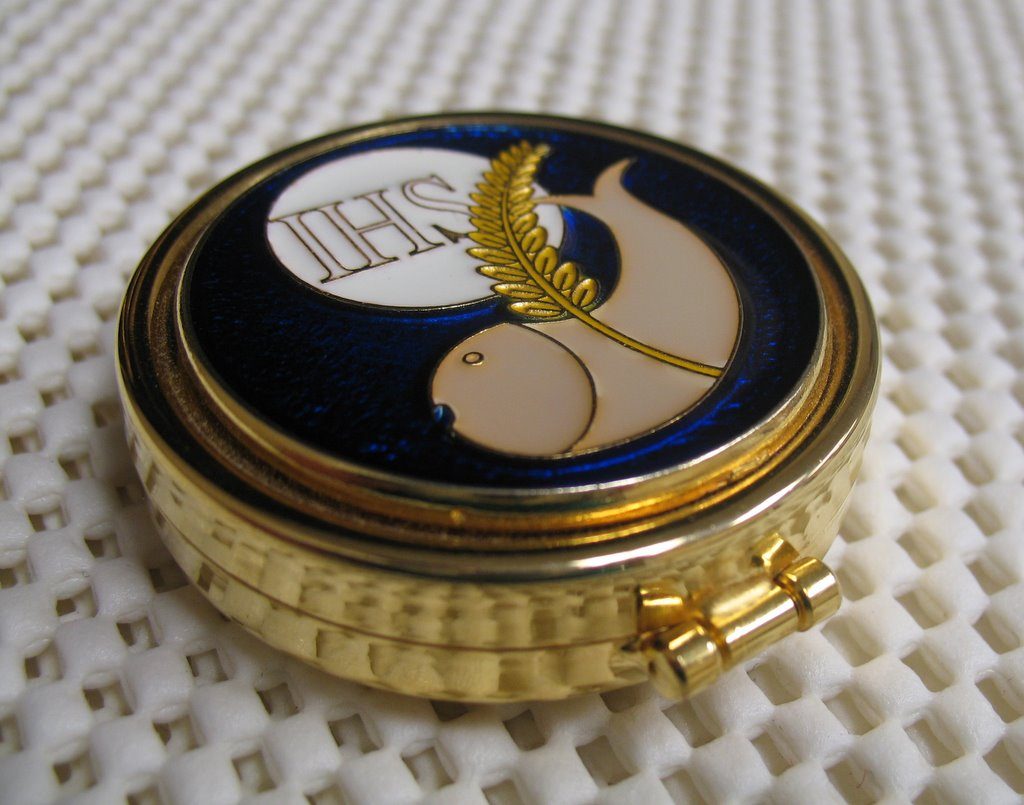