From the Greek word, laos, meaning “people,” the laity are the non-ordained members of a church, as distinguished from “the clergy”. An single member of the laity would be referred to as a “lay person.”

From Latin, meaning, “I will wash.” The name originally referred to the ceremonial washing of the priests hands before he or she celebrated Communion, while saying the words, “I will wash my hands in innocence.” (Psalm 26:6). The name lavabo also refers to the small towel used to dry the hands and the bowl into which water is poured during the washing. Thus, to call the towel a lavabo towel, or to call the bowl a lavabo bowl would be technically redundant.

A person who is not ordained, but who works closely with a church or religious program. Some lay ministers are un-paid volunteers; some are paid staff members of a church.

Any non-ordained person; in the Anglican church today, lay person is often used instead of the older “politically incorrect” usage “layman”.

Any non-ordained person who participates in reading part of a church service. Lay readers sometimes serve as chalice-bearers at a Eucharist. 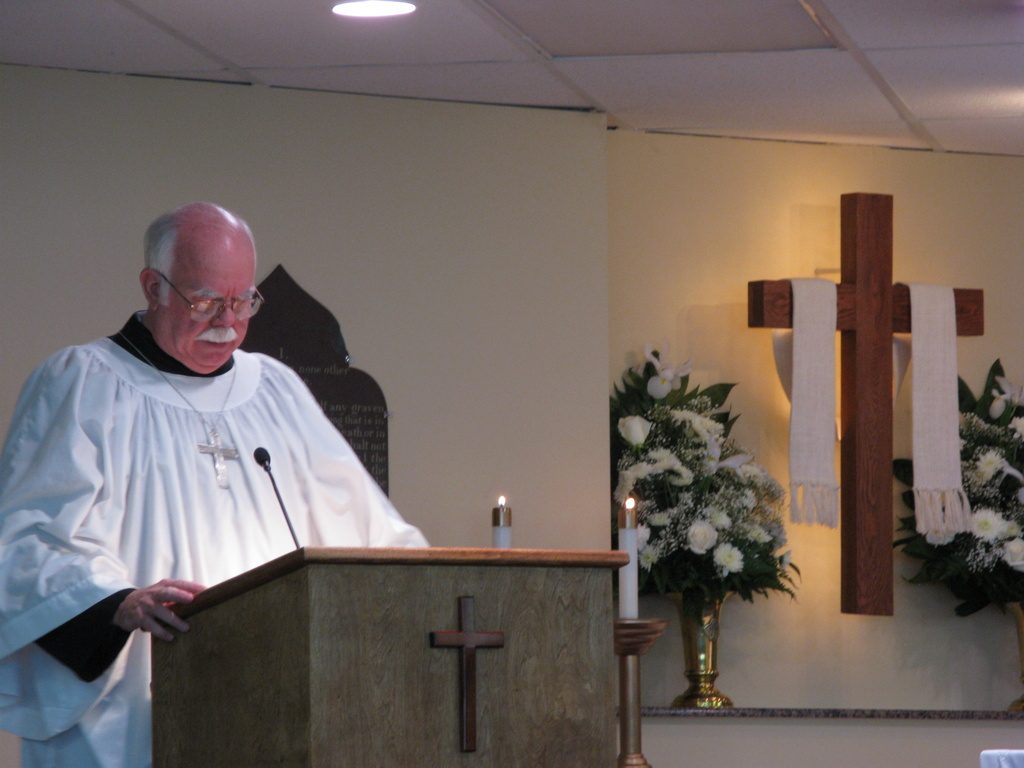 From the Latin, lectrum, meaning “reading desk” – A raised platform used for reading prayers or scripture; usually located at the front of the nave, opposite the pulpit, on the epistle side.

The complex series of Biblical readings used in Anglican Churches throughout the year. The Church uses a three-year cycle of lessons for Sunday readings and a two-year cycle for daily readings.

An abbreviation for “Lay Eucharistic Minister” A LEM(or PLEM) is an individual who has undergone special training and is authorized by the priest to take pre-consecrated Communion to a sick or shut-in member of the parish or mission.

(Liturgical color usually purple or Lenten Array, and for the rarely observed Laetare Sunday, rose.  Holy week is generally red with white on Maundy Thursday, and Black on Good Friday)

From an Anglo-Saxon word, lencten, meaning, “spring,” the time of the lengthening of the days. Lent is one of the six seasons of the church year and is the forty-day period beginning on Ash Wednesday and ending on Holy Saturday (the day before Easter). The period is actually 46 days, but since Sundays are feast days, they are never included in the count. Lent is intended to be a period of preparation and penitence marked by fasting, meditation and sobriety. Lent is widely associated with denial — “giving something up for Lent.”

Popular name of the Festival of Lessons and Carols held during late Advent or early Christmas at Anglican Churches throughout the world.

A solemn form of supplication for God’s mercy, composed of short responsive prayers. The traditional Anglican Litany is almost recognizable in the words of The Great Litany used across the wider Church Catholic.

From “liturgy,” used to describe a particular style of worship that requires active participation (standing, sitting, kneeling, recitation, common prayer, etc.) from both the clergy and laity. Anglican, Lutheran, Reformed, Orthodox, and Roman Catholic churches are generally considered to be liturgical churches, while many Protestant denominations are not.

From a combination of two Greek words, laos (people) and ergon (work). Literally the word means “the work of the people, ” and is generally used to refer to the entire, complete worship service.

A popular designation for a church that is, on the whole, less formal. Most low churches tend to emphasize good sermons as being more important than good liturgy, and do not chant or sing their services or use incense or sanctus bells. A low church might alternate Morning Prayer with the Eucharist for their primary Sunday worship; in some circles it is known as “Evangelical”.

Specifically, the term refers to the Sunday that follows the highest Sunday of the year — Easter. Some wags will insist that the name refers to the low attendance on that Sunday following Easter.