A sort of “short-hand” used by many participants in worldwide web discussion groups when referring to the Archbishop of Canterbury. 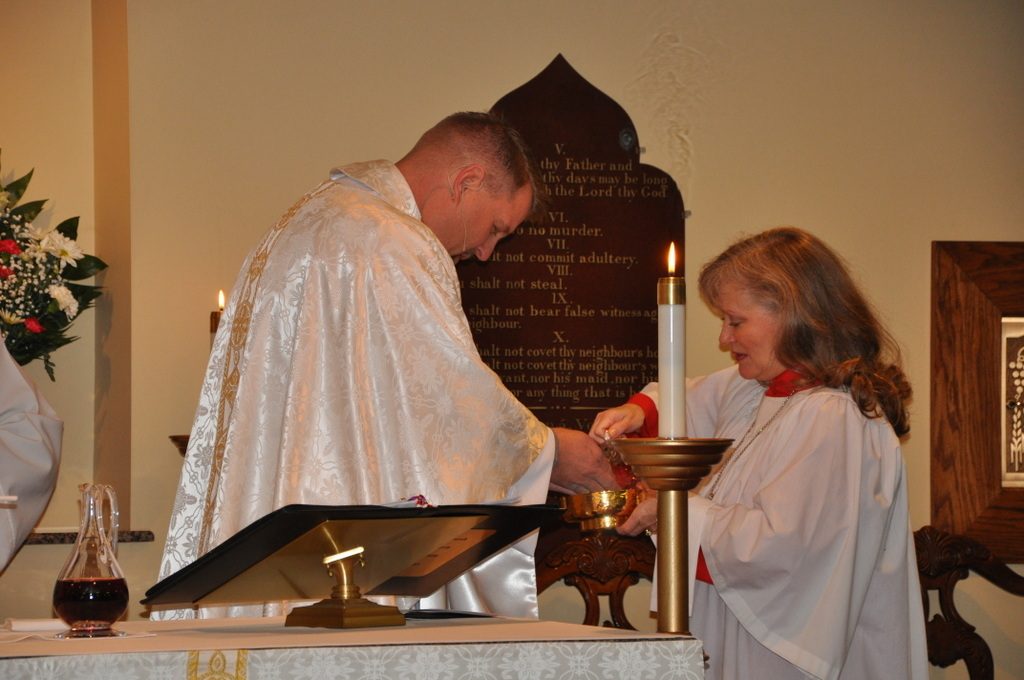 A declaration by a bishop or priest, announcing forgiveness by God to those who have confessed their sins and repented. 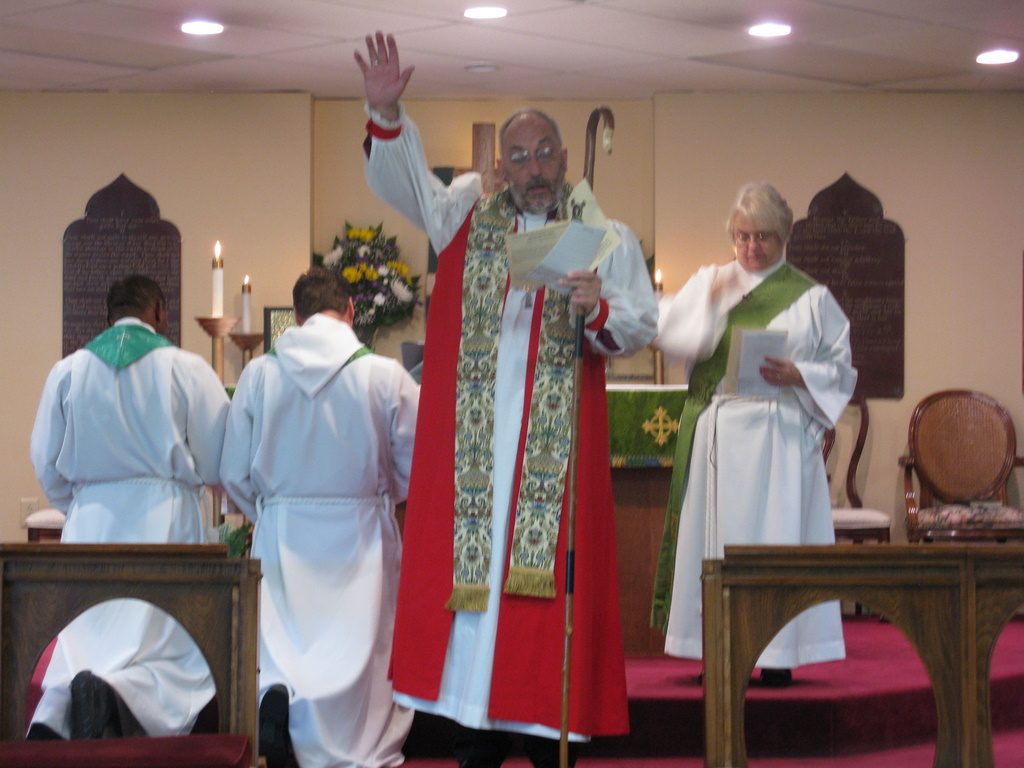 The ACNA (or “Anglican Church in North America”) is a Christian denomination in the Anglican tradition with 28 dioceses in the United States and Canada. The ACNA has some 100,000 members in 742 parishes. The current leader is the Most Reverend Robert Duncan, Archbishop and Primate of the ACNA.

It is a Province-in-formation in the global Anglican Communion, initiated by the request of the Global Anglican Future Conference (GAFCon) in June 2008 and formally recognized by the GAFCon Primates – leaders of Anglican Churches representing 70 per cent of the active Anglicans globally – on 16 April 2009 after a thorough examination of ACNA’s leadership, organizational structure, proposed constitution and proposed canons.

From a Greek word meaning, “to follow.” Acolytes are lay volunteers who follow the Cross in the procession and recession and assist the priest in worship. An acolyte lights and sometimes carries candles, and helps in the preparation of communion. 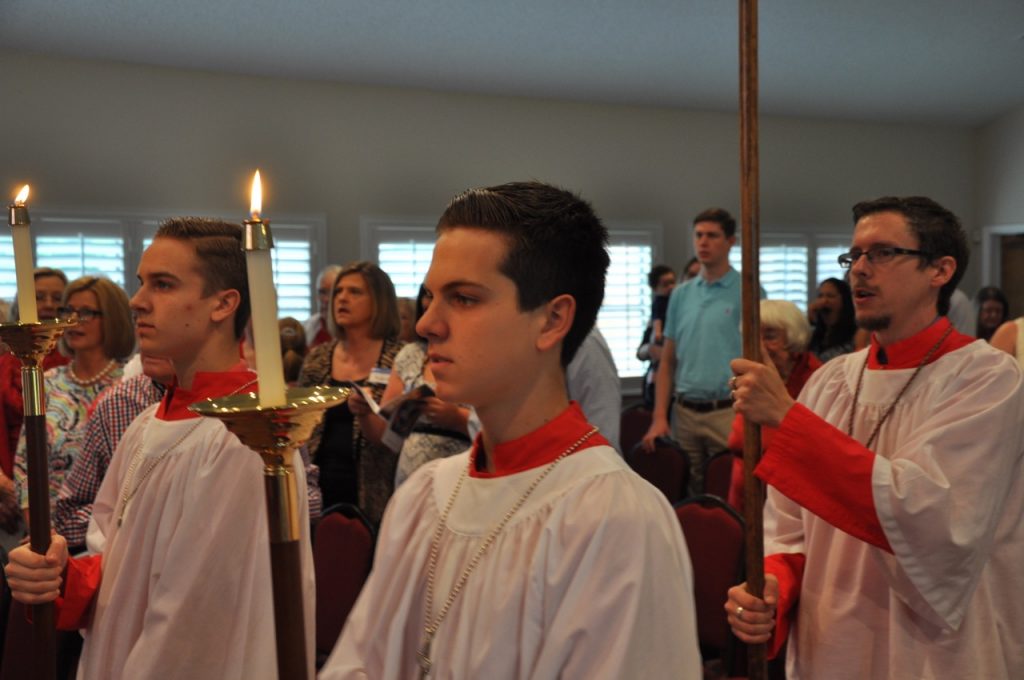 From the Latin: Adventus: “Coming.” Advent is the first season of the Church year. Advent begins four Sundays before Christmas and ends on Christmas day. The color of Advent is traditionally purple or blue, marking the preparational aspects of the season. In Advent we prepare for our Lord’s coming in three ways: at Christmas; for his coming into our hearts; and for his coming again at the end of time.

A wreath with four or five candles, used in most Anglican churches and in some homes during the season of Advent. Four candles are placed in a circle, and a fifth may be placed in the center. One candle is lit on the first Sunday in Advent, two on the second Sunday, three on the third and four on the fourth Sunday in Advent. On Christmas Eve/Day, the fifth candle is lighted. The first four candles may be purple or blue. The third week of Advent, Gaudete Sunday, is typically rose in color. The Christ Candle in the center is typically white. 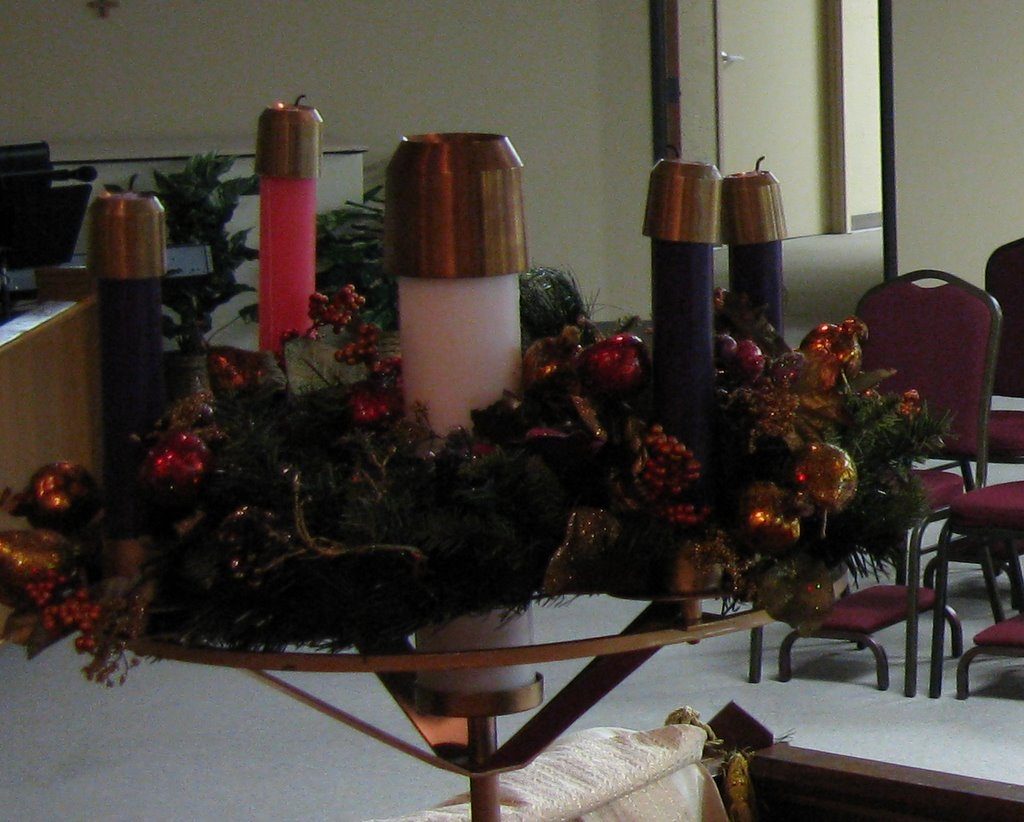 From two Latin words: angus, meaning “lamb” and dei, meaning “of God.” The term refers to a three-part litany frequently said or sung after the fraction in the Holy Communion part of the Eucharist.

The center passage of a church building bisecting the pews, extending from the narthex to the chancel. 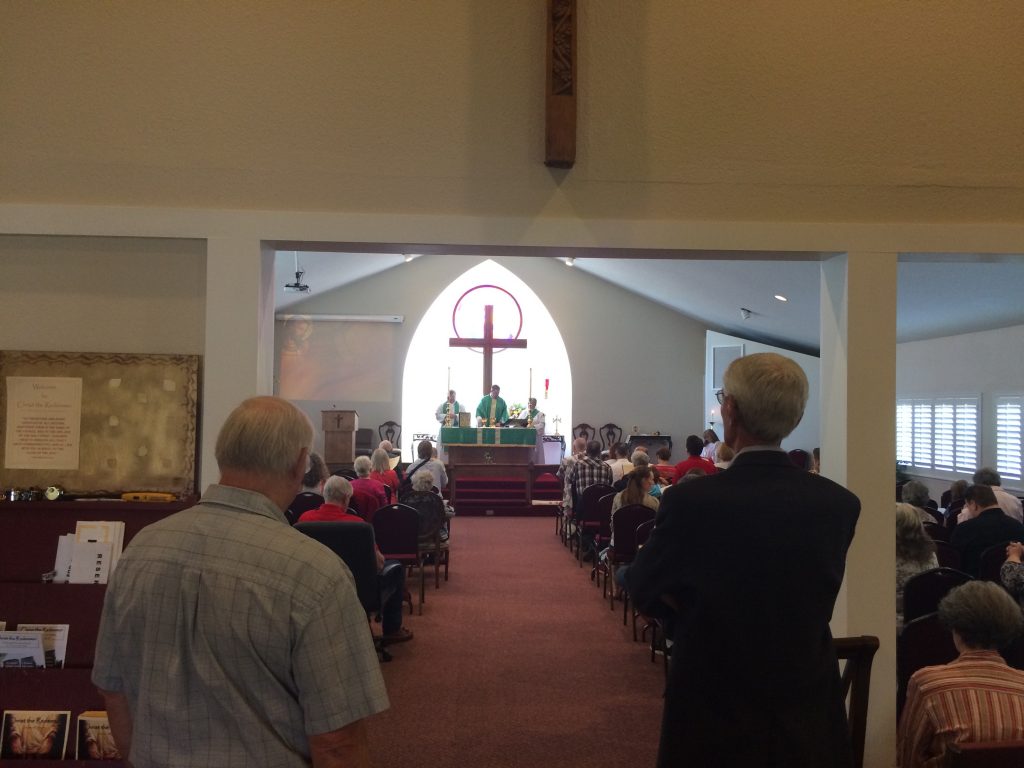 A white robe worn by many priests when celebrating communion, generally worn over daily clothes but under other vestments. A polyester variation of the alb called the cassock-alb has become the de facto standard Eucharistic garment for many, if not most Anglican, Lutheran, and Roman Catholic clergy.

November 1st – (liturgical color white) a day we commemorate all the saints of the Church Triumphant and those we know who’ve joined the saints in worship at the heavenly banquet table. Originally known as “All Hallows Day,” and followed “all hallows eve” (Halloween).

From the Greek word eleos, meaning “pity.” Money given by the Church to the poor. According to the canons, the loose offering (cash and undesignated checks) on the first Sunday of every month is supposed to go into an Alms account.

The alms basin is the larger silver plate that the smaller collection plates the ushers use are put in. The picture here is one of the offering plates used by our ushers. 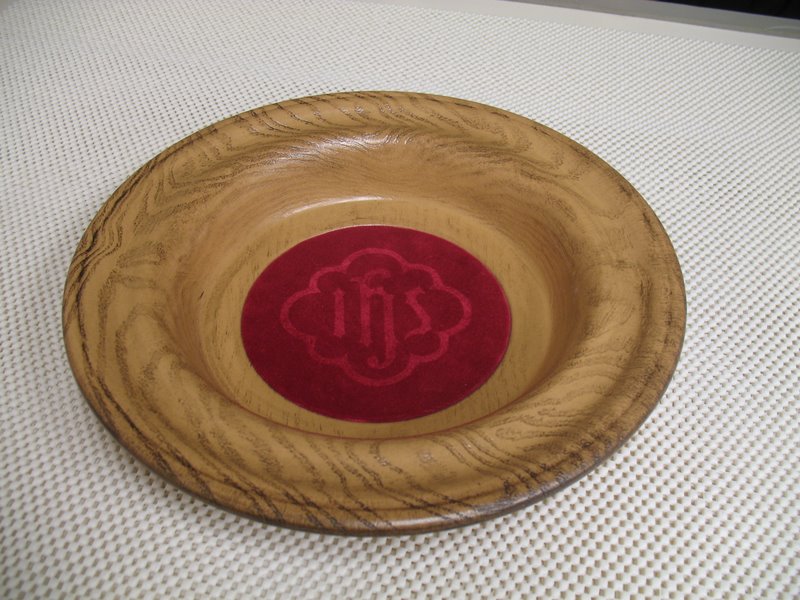 A table, usually in the sanctuary, on which the bread and wine used in the Communion service are consecrated. Also known as and referred to in the prayer book as the Holy Table. It traditionally was set for the celebrant to face east-oriented, but in recent years, most altars are set for celebrants to face the congregation. 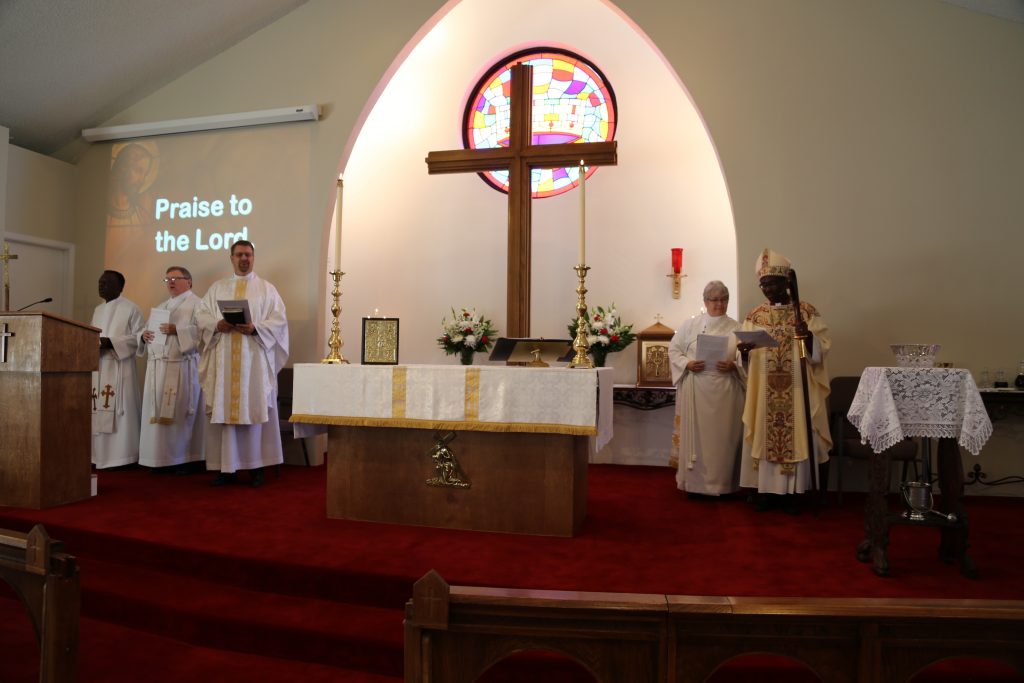 A special lay service group in a church who prepare the altar and maintain the furnishings in a church building. The altar guild usually supervises all seasonal church decorations and is usually responsible for all flower arrangements.

A side aisle in a church building, between the pews and the side walls, most often used for special processions. 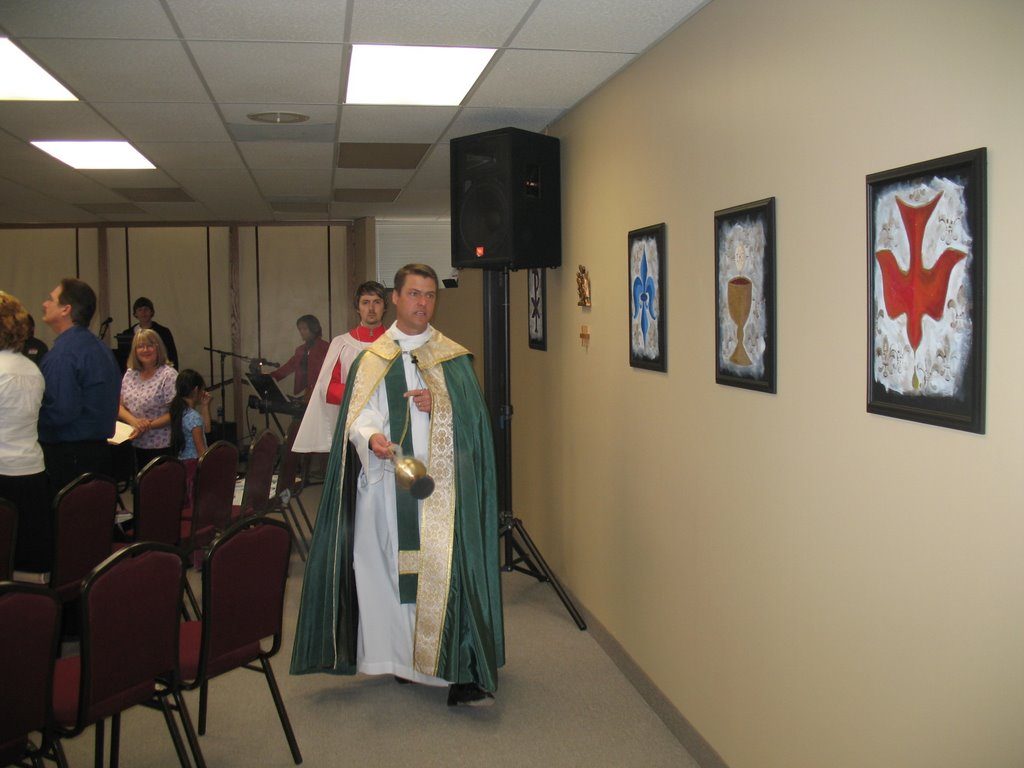 From Hebrew, meaning, “So be it.” Anglicans say “ah-men,” while most other communions say “eh-men.”

A rectangular neckpiece or collar worn with an alb. The amice is generally not worn by a low church person.

A term which simply means “English.” The various national/regional churches that are part of the worldwide Anglican Communion — a collection of Churches around the world that has their origins in the Church of England.

Primarily a style of worship which is noted for its beauty, majesty and formality, but also a fundamental understanding of the nature of the Church and the sacramental way that the church relates to everyday life. It had it’s primary resurgence in the 19th Century Oxford Movement in England.

The first part of the Eucharist service, including The Peace, and ending before the offertory. In the prayer book, the ante-communion is also known as “The Word of God.”

A hymn or choral piece sung only by a choir, without the congregation. 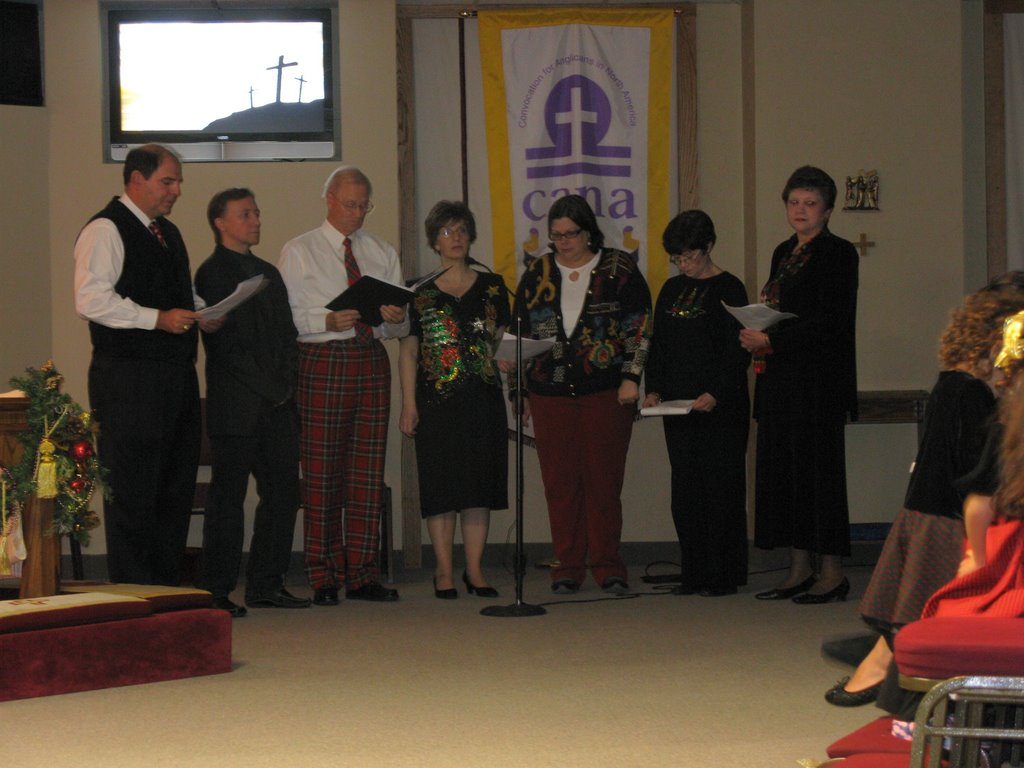 From the Greek words anti, meaning “against,” and phone, meaning “sound.” An antiphon is literally a song sung back and forth by two choirs, or by one choir divided into two sections. In some Anglican Churches, the Kyrie and the Sursum Corda are two examples of antiphons. The familiar exchange “The Lord be with you” – “And also with you” (or in more formal forms “And with thy spirit”) is also an antiphon.

The abandonment of Christianity or the denial of the belief in Jesus Christ as the Son of God.

The term used by most of the Anglican Communion to define a bishop in charge of a group of dioceses in a geographical area, or a national church. His superiority over other bishops is only a matter of organizational rank. As the saying goes, “He is first among equals.” In writing or speaking to an archbishop, the form of address is “The Most Reverend.” The Archbishop of Canterbury has an additional title: The Most Reverend and Right Honorable Dr. Rowan Williams. In speaking to him directly, you call an archbishop “Your Grace.”

The Archbishop of the ACNA is The Rt Reverend Dr. Foley Beach, pictured here. 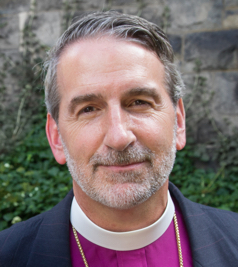 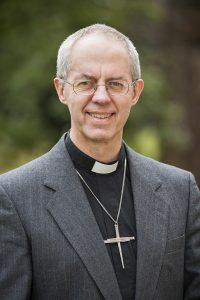 A priest (or increasingly, a deacon) who is part of a bishop’s staff and who usually has some administrative supervision over missions for the bishop. Archdeacons are referred to as “The Venerable” [The Ven.]: The Venerable John Q. Beckwith. (The title “Reverend” is not used if Venerable is used.) Archdeacons sometimes wear purple cassocks instead of black ones, or black cassocks with purple piping.

(Liturgical color is purple, and rarely “Lenten Array”, black, or grey) The Wednesday marking the beginning of the season of Lent, usually observed with a period of fasting and spiritual preparation. In the Ash Wednesday liturgy, the celebrant usually smears ashes on a person’s forehead as a mark of their mortality (“Remember that you are dust, and to dust you shall return.”) The ashes are often pulverized burned palms saved from the previous year’s Palm Sunday celebration mixed with anointing oil.

A box or cupboard in the wall of a church building or in a sacristy where the Reserved Sacrament is kept. 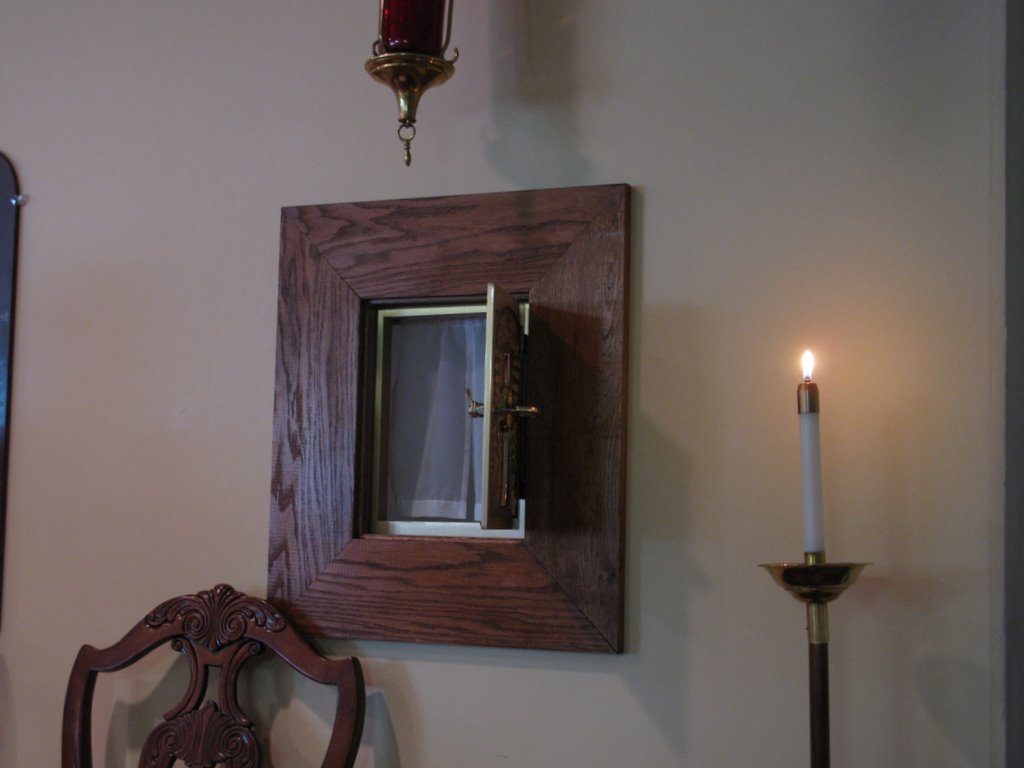